The Science Of LENR: Part 3

Widom-Larsen Theory
LENR is a new science that is still as yet not understood. It will only be fully understood once commercialization has occurred and all secrets of it’s modus operandi are revealed, paving the way for computer simulations of what actually happens in the reactions. When Fleischman & Pons came out in 1989 and said they had discovered a new energy source, they made the mistake of calling it Cold Fusion, which is really inaccurate as no fusion is taking place. Fusion is what happens in the Sun and requires humongous temperatures which no known earthly material can contain, whereas LENR can take place on a table top in your kitchen.

The Science of LENR was then rejected because nobody understood what was taking place in the reaction and nobody could replicate it.

Various theories have thus been put forward to explain LENR and one of them, probably the most accurate & likely theory so far, is the Widom-Larsen, dealing with many-body collective effects first understood by Einstein. This theory is currently being used by NASA in their LENR research. It rejects the idea of fusion because fusion requires the release of gamma rays as one of its by products, yet no LENR experiment has found such deadly emissions thus far. 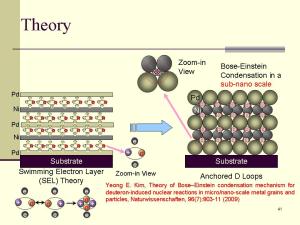 The Bose-Einstein condensate was a material developed by Einstein and Bose that exists at a temperature of absolute zero. Yeong E Kim proposes that this kind of material is formed in an LENR reaction chamber, enabling the creation of excess heat. The Hydrino theory is an entirely new form of Physics that has been largely rejected because it proposes the lowering of Hydrogen into Quantum states, called Hydrinos, that, according to known science, cannot possibly exist.

This entry was posted in Uncategorized and tagged Cold Fusion, Einstein, LENR, NASA. Bookmark the permalink.

6 Responses to The Science Of LENR: Part 3