After 22 years of secretly investigating and tinkering with a potentially significant new source of energy known previously as Cold Fusion, but today known as LENR(Low Energy Nuclear Reactions), Andrea Rossi 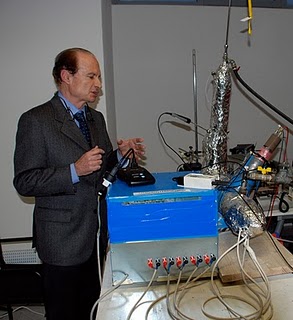 finally made a public demonstration of his device on the 14th of January 2011. He called this device the E-Cat, short for Energy Catalyzer. It produced copious amounts of heat from a few grams of hydrogen. So much heat, in fact, that no chemical reaction known to science could possibly explain it.

Today, the E-Cat has graduated from not just being a big metal box that produces large amounts of heat, to a sleek small unit powered by only 1 gram of fuel in a volume too small to even bother talking about (0.063 liters). It not only directly produces heat but now also produces Light and Electricity as well, without any moving parts, no photovoltaics, no thermoelectric or electromagnetic modules. Just one sleek little device doing all the heavy lifting.

1 MW of electricity from a 1 cubic meter E-Cat X.

Using only 1 gram of fuel, of which 0,1 grams of that is hydrogen, the E-Cat has a power density of 1 KW per liter and the hydrogen itself has a measured energy density of 1 600 MWh/kg. In comparison, gasoline has an energy density of only 0.012 MWh/kg. The difference is enormous because the E-Cat makes use of a nuclear reaction to extract energy from the hydrogen atoms, while with gasoline we’re talking about a chemical reaction, i.e. burning the fuel in an internal combustion engine.

According to Rossi, the reaction can be stopped and started instantaneously, making it viable for use in vehicles.